What a crazy meeting! In today's meeting with Danielle (a truly wonderful soul who clearly knows how much help we really need), we submitted a slew of changes, picked our colors and completely changed our kitchen layout! More about all of them in a few moments, but suffice it to say that we are thoroughly exhausted!

We finalized all of our decisions about exterior color, interior paint, exterior finishes, kitchen and bath cabinet colors, counter tops and vanity tops. If that sounds like a lot, it felt like a lot more! We're feeling pretty good about our colors, let's hope that's true we we see them live!

Here's our front elevations to help figure out what is going where...I hope! 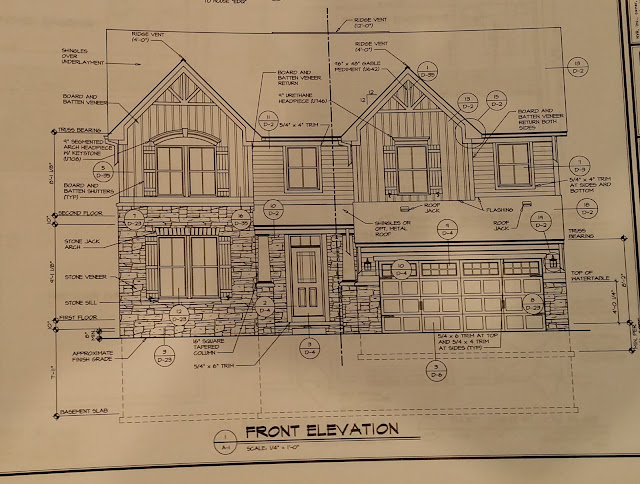 For the stone on the front, we chose Dakota - it's the bottom part of the shown in the front elevation above. 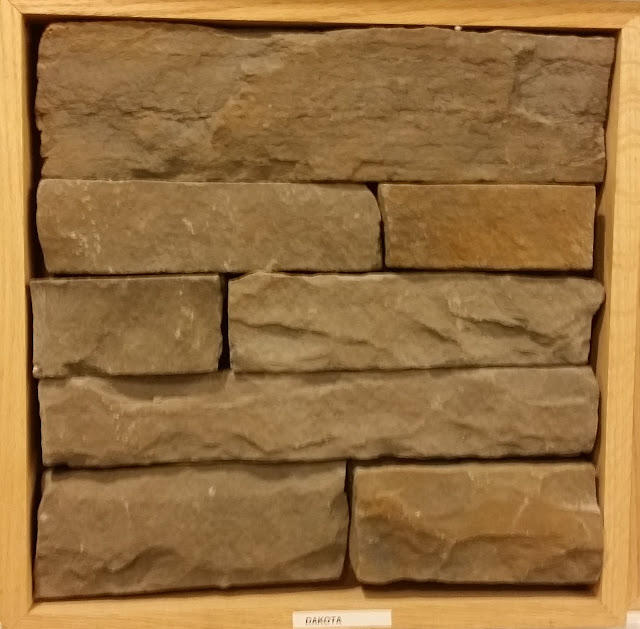 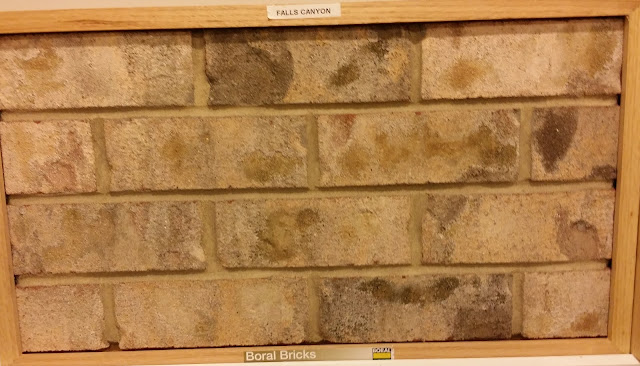 Here's the two of them shown together (as if you were looking at one of the front corners of the house from the street): 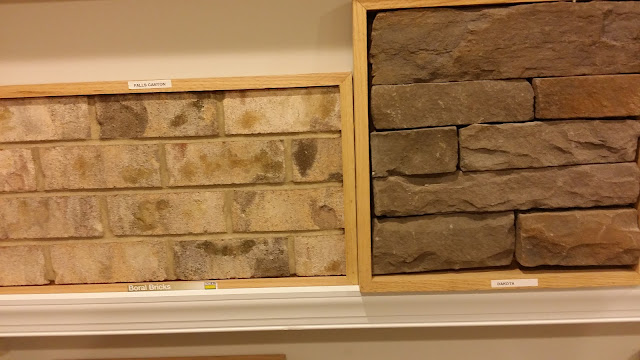 For the colors, we had to choose a primary and secondary color. The primary color is used on the clapboard (anywhere you can see the horizontal stripes in the front elevation above - in additional it will extend around the sides and back of the second story, above the brick on the first story). The secondary color will be used for all of the board and batten shown (the vertical siding) shown in the front elevation above. Believe it or not, Ryan Homes does not have have color/finish simulation program - for either exterior or interior choices. It seems like such an oversight not have one to use for comparing all of the options!

All of the trim will be white, which we think will dress everything up a little. The roof over the porch will be a black tin roof, the shutters and front door will also be black.

Probably just as nerve-wracking were the interior color choices we made. We upgraded all of our counter and vanity tops to granite and picked out the colors. For the kitchen, we chose the Rushmore in Painted Linen with Uba Tuba granite counter tops.
For the bathrooms, we choose the Scottsdale in Maple Expresso with Burlywood granite vanity tops.

Whew. That's a lot. Are you tired yet? I sure am, but there's still more! I haven't even gotten to the new kitchen layout!

When reviewing the electrical blueprints, we came across an alternate kitchen layout that wasn't include in the initial list of options we considered when putting our Dunkirk together. The new layout redesigned the kitchen to include a butler's pantry and made the kitchen flow into the morning room, giving everything a much more open feel. We asked about it during today's meeting and discovered that it was added as an option two days after we initially signed our contract!

We think that we'll be able to add it and possibly the hutch that extends into the morning room, but we're waiting on some final pricing to be sure. Tentatively, it looks as though removing the gourmet island will cover the cost of the butler's pantry, so we're very optimistic we'll be able to move forward with the new kitchen! And only days before our deadline for structural changes!

Have I built the suspense enough? Are you ready to see what we're so excited about? Here's the sketch from the electrical blueprints that has us all giddy on the inside! 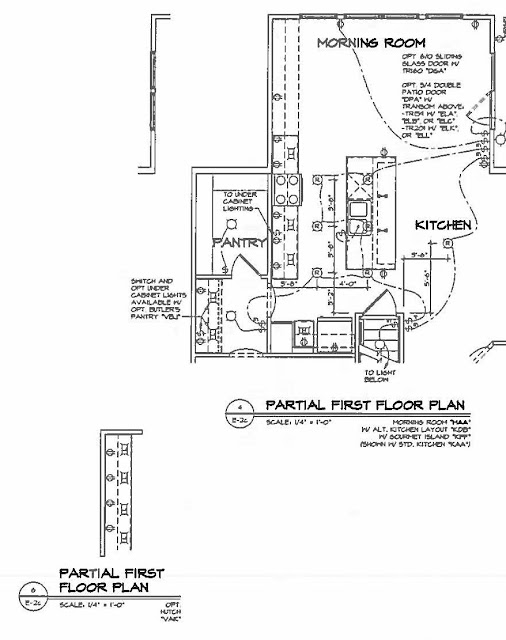 We're finally down to the mundane additions that we added thanks to reading many of the other blogs that exist about building with Ryan Homes. Many were things that we didn't think of, so I'm adding them here in the hope that they help other consider them as well!

There were a couple of questions that we are waiting on some additional info about. One is about adding a 100A sub-panel in the garage for future expansion. Hopefully we'll be able to add one, but we'll see what the experts say in a couple of days.